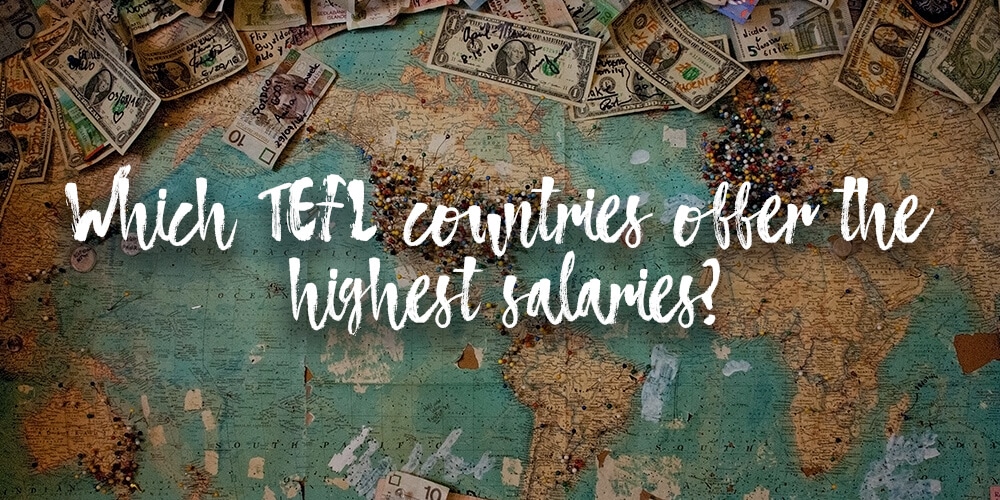 The reward of TEFL comes from the unique experience of living in another culture, communicating with new people, and facing different challenges almost daily. However, that doesn’t mean your wages aren’t important and it is useful to know where pays the most so that you can live as comfortably as possible.

In this modern East Asian nation, you can expect to be earning between £1000 to £2000 per month here. Like most of East Asia, demand is high for teachers. The advanced economy of South Korea provides stable jobs to TEFL tutors which is why this country is a very popular destination for English teachers.

Have a look at some TEFL positions in South Korea.

China probably has one of the largest, if not the largest, TEFL industry in the world. There are tonnes of jobs going here. Again, you can expect to be earning anywhere between £1000 to £2000+ per month in China. The Chinese education system is world-class and so the standards are relatively high for many schools, but the rewards are well worth the work.

Here, salaries as a private tutor can soar up to around an astounding £4000 a month, but are more often between the £1000 and £2500 mark. In the Middle East, your level of qualification/experience can seriously affect the amount you earn i.e. a Masters degree can get you up to £4000 a month whilst having only a TEFL certificate may keep you in the 1000s (which is still pretty goood in TEFL).

Like the sound of working in one of the most luxurious countries in the world? Then take a look at our regularly updated Jobs Centre and see if anything suits you.

Similar to the UAE, in Saudi Arabia you can expect relatively large monthly salaries at around £2000 to £3,500. Depending on experience and qualifications, your salary could be up to a giant £4000 here! Situated largely in the Arabian Desert, this devout Muslim country will certainly come as a challenge to get used to, but will no doubt prove to be an eye-opening experience.

Check our guide on Saudi Arabia to learn more about working in the country.

In Japan a TEFL teacher could be looking at around £2000 per month plus accommodation. Forgetting the great pay, the best thing about working in Japan is getting to expose yourself to such a wonderful culture where ancient traditions are blended with super-modern cities and industry. Demand is pretty high here too so finding a job, if you’ve got the right qualifications, should be no problem.

We have a country guide on Japan, check it out!

Things to keep in mind

Good luck in your TEFL adventure and remember that the salary isn’t everything at the end of the day.

If you want to apply to a job in our Jobs Centre, make sure to enrol in one of our TEFL courses first.