So, we’re 3 weeks into our new adventure and already it feels like much, much longer.  So much has happened…where to start…?!

The last week in the UK was really hard, much harder than I anticipated actually. All of the excitement had completely disappeared and I was in panic mode, I really felt like I needed one more week, the date had crept up on me so quickly and I didn’t feel ready to say goodbye to everyone. There were tears, but I made a pact with myself that once I had said those goodbyes at the departure gates at Heathrow that would be it – NO more tears!  Just lots of positive thinking and the start of a brand new adventure for us….and I kept my promise! 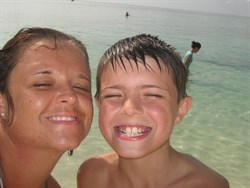 In typical me style, my arrival into Thailand was not without drama, after a 14.5 hour flight and then a three-hour bus journey…I met my Dad at the bus station…1 hour into that journey I realised that I had left my laptop case which contained not only the laptop but all my TEFL stuff, the iPad, Matthew’s UK school books and numerous photos in, in the overhead carrier of the bus I was on. I would guess about £700 worth of stuff, GONE!  My heart sank as I really thought I had lost it all but….we called the bus company and alas, they had the bag. It was on its way back to Bangkok but they would send it back to Hua Hin station tomorrow. I can’t tell you how happy I was.

Well, I don’t think we have done too badly really, in three weeks we have moved into a great condo, have transport in the form of a Saling and I have made lots of contacts work-wise. I won’t start paid employment until May as the kids here are now on a long holiday. I have been emailing with a lady from a local government school I think I would like to work at, they seem keen to see me and I am keen on the school. I have been to look around and it looks nice, very busy and hectic but nice!

There are other government schools that I have been told are desperate for English Teachers too so if plan a fails I think there is always plan B, C, D, etc. There is a private language school here too which is really great and run by a Scottish guy, he has lots of part time hours available, so once I have my full time contract somewhere,  a work permit & teachers licence I can go there evenings and weekends to take classes if I need extra income.

The schools I have made contact with have all been really accommodating. I have been invited into the classrooms to watch how it’s done and it’s amazing seeing all of the TEFL stuff I was taught being used in practice. I am very excited to get started!

My son has settled well, he has made a friend and goes off with him now to the local swimming pool and to play footy. Oh and we have his PS3 working as well which is an added bonus!!!  He has started Thai lessons and goes twice a week, so hopefully come May he will have enough basic knowledge to help him in the classroom. Tomorrow he is starting at a summer camp at a local school for two weeks, so this will be an interesting test to see how is going to get on. I can’t help but think that it will be school that makes or breaks this for him, but we shall see!

I have to admit, after hearing lots of horror stories I am dreading the whole visa situation and getting all of that sorted, I can’t really say much more about this at the moment as I have no clue as to what is involved and no one I have asked seems to either…..I’ll save all that for another blog…wish me luck!

But yeah, so far so good and certainly no regrets. Everything is slipping into place quite nicely, fingers crossed for more of the same over the coming weeks.