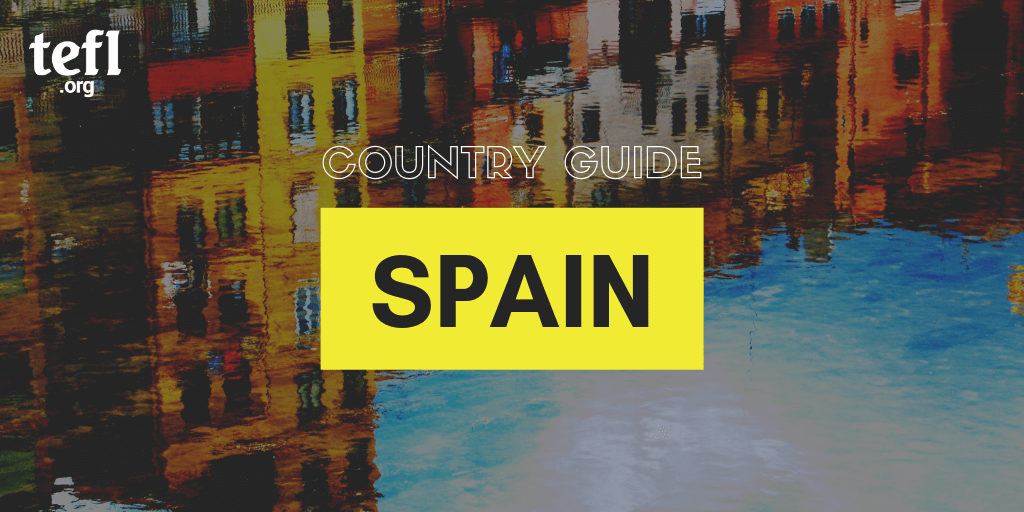 The climate, afternoon siestas, renowned cuisine, and the strongest TEFL jobs market in Europe are just a few reasons why so many EFL teachers love teaching English in Spain.

EFL teachers are in high demand in Spain and we’ve heard from many course graduates who’ve gone on to teach there that within a matter of months they were turning down work because they were so popular! Whether you’re attracted to the bustling nightlife of Madrid, the beaches of Valencia, or the picturesque views of Granada, there are opportunities to be found across the width and breadth of the country.


You might not get rich teaching English in Spain, but money isn’t what attracts teachers to this vibrant country. You can earn enough to enjoy a good quality of life and experience what Spain has to offer, and it’s unlikely you’ll ever be stuck for work due to the sheer demand for EFL teachers. Many teachers working in schools and language assistants subsidise their income by tutoring on the side, which can give your income a big boost.

The cost of living in cities such as Madrid and Barcelona will be higher than elsewhere in the country, but your salary/amount you can charge for tutoring will be reflective of this. It’s uncommon for employers in Spain to offer accommodation as part of your contract (unless it’s a summer school) but they may be able to offer assistance and advice. Most teachers share accommodation with other teachers or expats.


Ten years ago, Spain was hit by a financial crisis that resulted in sky-high unemployment rates. While sections of the Spanish economy collapsed, the demand for English tuition spiked as Spaniards sought to re-enter education to boost their employability. This has resulted in a demand for EFL teachers that is unparalleled across the rest of Europe.

There’s plenty of work in Spain to be found year-round for teachers in language schools, state schools, private tutoring, and at summer camps. Many teachers working for schools will also tutor alongside this, on average making around 10 to 25 euros an hour depending on location and experience.

You don’t need a degree to teach English in Spain but having one makes it much easier to pick up work. If you’re from outside the EU it’s very difficult to legally work teaching English in Spain, as employers can only sponsor a visa if an EU citizen can’t fill the position. An option for non-EU citizens is to enter the country on a student visa, which allows you to work for a limited number of hours per week. For more information, see our post about how to TEFL in Europe as a non-EU citizen.

We always have TEFL jobs in Spain over on our Jobs Centre and you can also find positions on other jobs boards such as Lingo Bongo, Tus Clases Particulares, TEFL.com, Jobs in Japan, Dave’s ESL Café, and ESL base.

A great option for first-time teachers looking for more support in their first role is to work as a Language Assistant. Meddeas place assistants in over 200 schools across Spain where you work between 20-25 hours per week for a monthly grant of €930-1,162.


After working as an au pair and tutoring English for a year in Madrid, Megan decided to work within the public school system as a language assistant. She told us all about the application process and what’s really involved in the job, as well as private tutoring on the side.

“Private classes were abundant and easy to find online via Lingobongo.com, tusclasesparticulares.com, or the bounty of Facebook groups for English teachers in Madrid. You could charge anywhere between 15 – 25 euro per hour, and have your pick of ages and types of lessons (business English, conversation, play dates, exam preparation…) to choose from. This extra pocket money meant we all had plenty to spend on Saturday night cañas in Malasaña, treat ourselves at El Rastro on Sundays, and weekend getaways on those all-important puentes and school holidays – which, by the way, are all paid. During my time in Madrid I got to visit Toledo, Segovia, Granada, Brussels, Bruges, and Amsterdam all during the school year, and in the Summer break I interrailed through Poland, Czech Republic, Hungary, Romania, Bulgaria, and Greece. Madrid itself is a fantastic city that prides itself on its world-class nightlife, blue skies, and that kind of famous football club… So even when you were staying in town for the weekend, you were never short of things to do.”

Harriet started her TEFL adventure in Spain where she worked in the North of the country in the small town of Mungia, just outside of Bilbao. The job involved teaching learners of a wide range of ages and abilities, which can be a bit daunting for a first-time teacher but it was a great opportunity to really test her teaching abilities!

“During my first year of teaching I taught all types of English to soooo many different ages – it was crazy. But good crazy. I taught English conversation skills to teens in the secondary school, played games and sang songs with younger children in ‘fun, after-school English class’, and even participated in baking and playtime with little ones at home. The experience really pushed the boundaries of my confidence and teaching abilities and I often found myself doing activities that I truly hadn’t anticipated myself doing. I played the guitar and sang Christmas songs with my students to nursery school children; I invigilated exams; I went on a week’s residential trip to the mountains and even I ended up half-directing an end-of-year performance.”