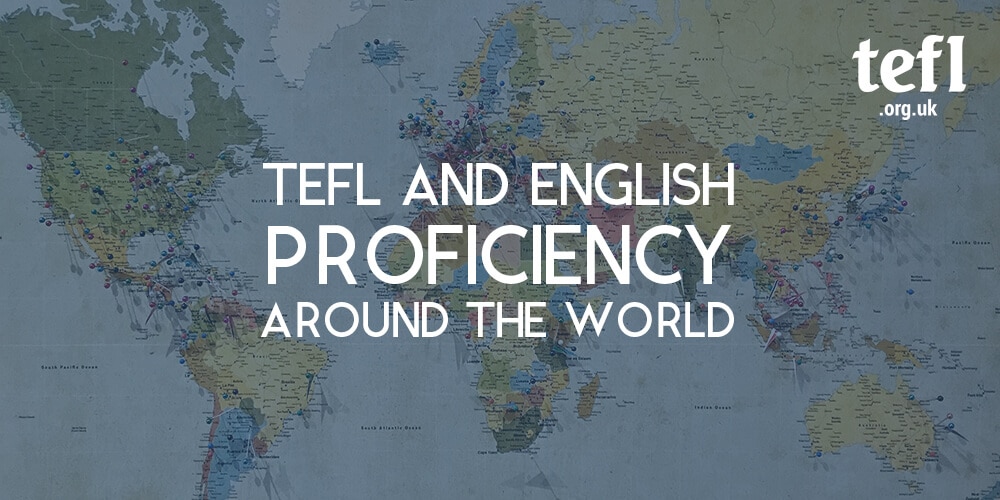 Overall, English proficiency has improved since last year’s index was published; 12 countries now rank in the top proficiency band, more than ever before. Public and private investment in English language teaching continues to increase, which is great news for EFL teachers. 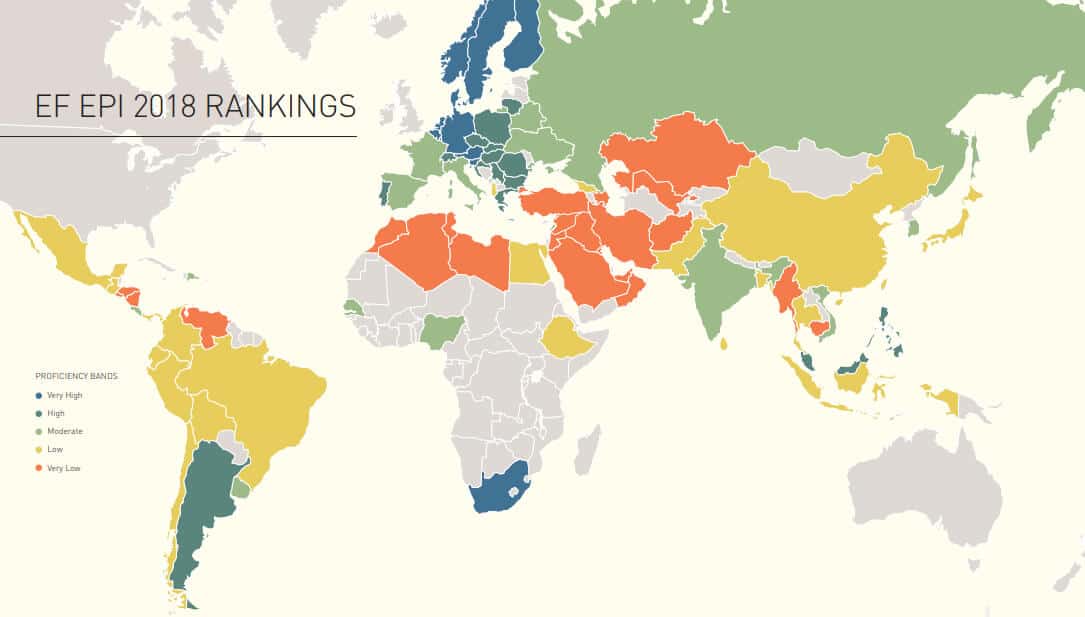 In last place in the index, at number 88, is Libya. The countries listed lowest in the table face a diverse range of obstacles, including ongoing conflict, severe issues with education infrastructure, and fragile economies and democracies.

Here are the top ten most and least proficient countries as ranked in the report: 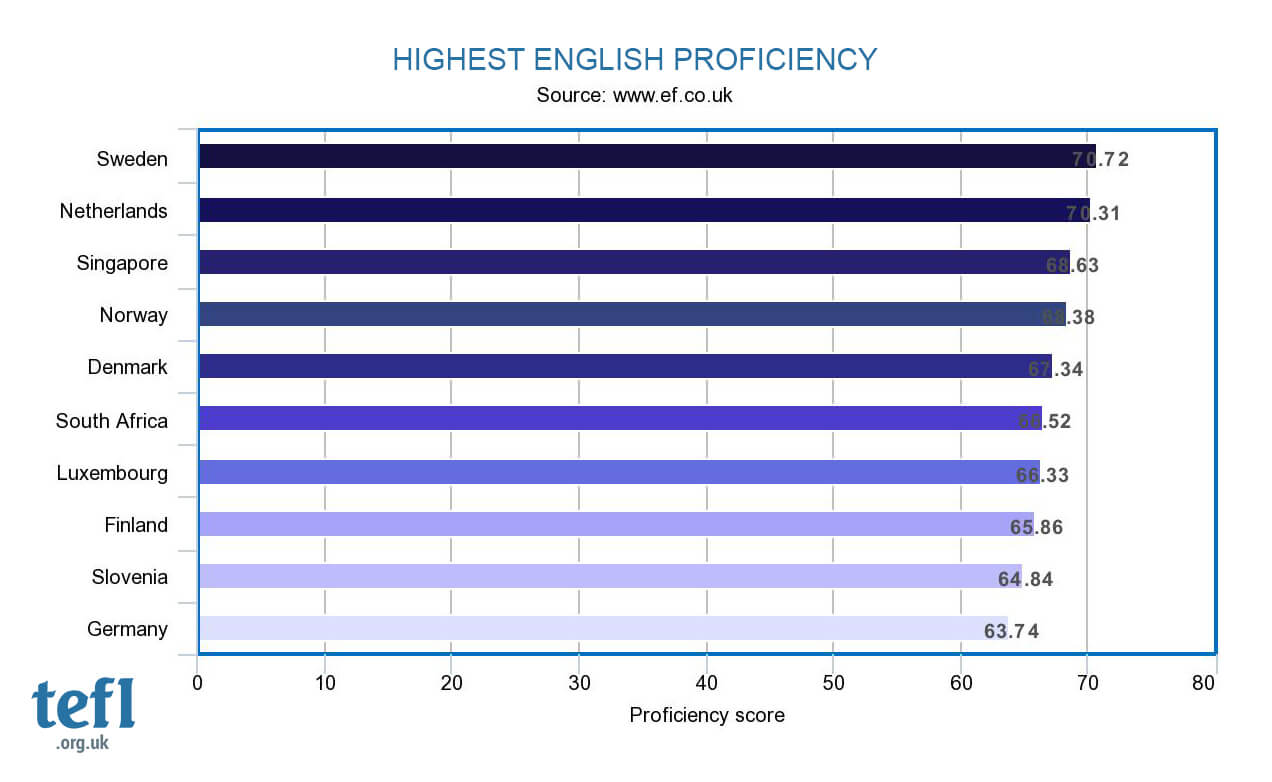 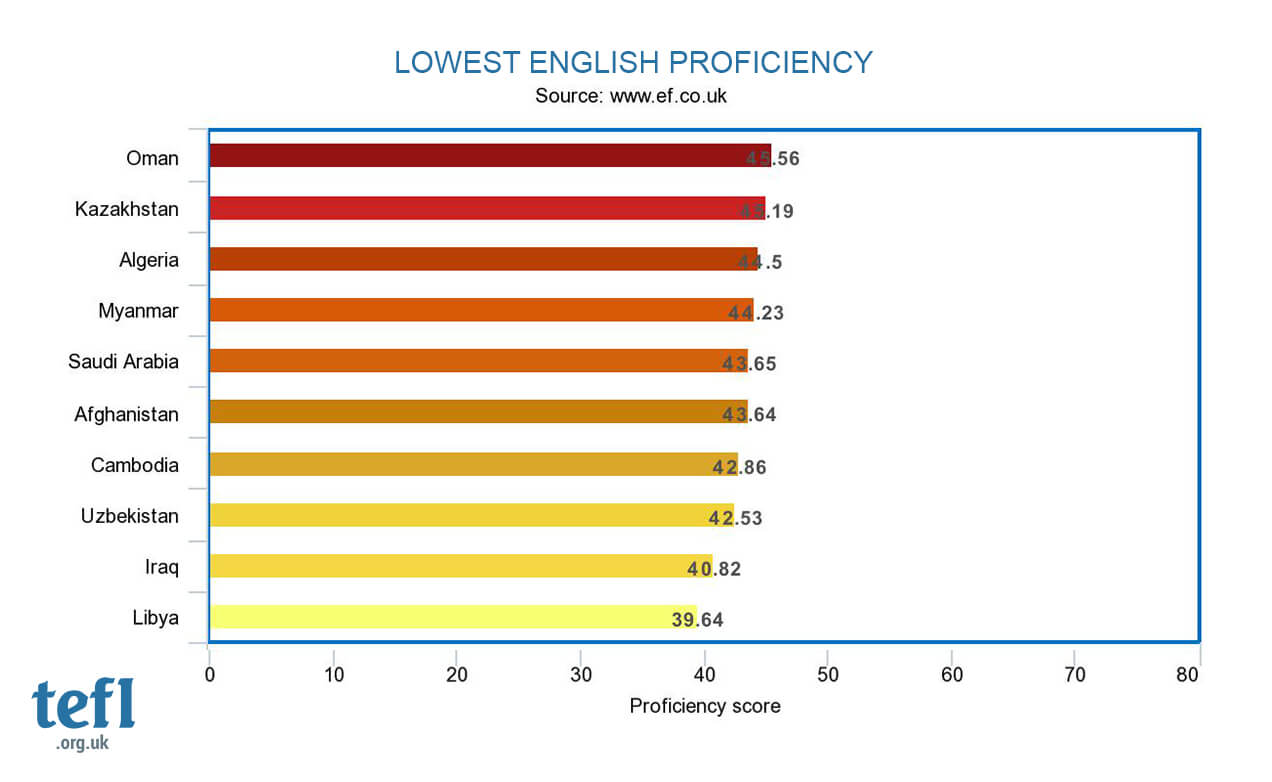 China’s proficiency score has slightly declined this year, however that’s not to say language learning is decreasing – in fact, the private English language market is estimated to continue growing at a rate of 22% per year. Additionally, 70% of parents want their kids to learn more English in school, so there is a wide understanding of the value of English.

Over in Japan, English will become an official subject in primary schools in 2020, which will double the current number of English classroom hours. In 2015 Japan ranked fifth from the bottom out of 30 Asian countries with TOEFL (Test of English as a Foreign Language) exams. Japan also ranks low in EF’s report and with the government showing a desire to introduce measures to combat this, this could lead to even more opportunities for EFL teachers over the coming years.

The index highlights Central Europe as an attractive place for business due to the combination of low costs and English proficiency. Young people who left for the UK and Ireland in the past five years have been returning due to the lower unemployment rates and strengthened economies and have brought with them their English skills. This is an area where opportunities for teaching business English, in particular, may continue to rise.

Where the EFL market is tougher

It’s not too surprising that those countries ranked as ‘very high proficiency’ are also countries where it’s harder to come by entry-level TEFL positions. Typically, a few years of EFL experience is going to be required to find positions in many of these countries, however Germany and Slovenia do offer opportunities for newly-qualified EFL teachers, which we see come in through the TEFL Jobs Centre.

France and Spain tail behind other European countries, but in these countries there is a history of government-led initiatives designed to protect national languages. This year, a court ruling in Italy prohibited degree programmes at Italian universities from being entirely taught in English – a measure intended to protect the Italian language. As the report found:

“Whenever English is perceived as a threat to national languages, English proficiency suffers.”

We know that our students are increasingly looking to enter the world of online English teaching after graduating. Teaching English online offers a number of attractive benefits, such as flexible working and the potential to work from anywhere in the world, and it’s encouraging to see reports indicate the growth and importance of this area of TEFL.

EF’s report highlights a link between availability and access to internet and English proficiency. Increasing access to technology and internet can only lead to further demand for online language learning, presenting even more opportunities for TEFL-qualified teachers. The report points out that “live online teaching” and innovation in this area is going to be essential going forward:

“Advancements in artificial intelligence, virtual reality, and other emerging technologies could usher in a new era of even more immersive and relevant digital training. In practice, however, many online courses are hampered by low adoption and high attrition rates. For technology-enabled English training to reach its full potential, more providers will need to engage students with compelling design strategies and live online teaching.”

We’ve understood of the huge potential of online TEFL for a number of years, which is why we offer an Advanced Teaching English Online course to equip EFL teachers with the specific skills and knowledge they need to succeed in the online teaching market.

Over the years the index has consistently found that women speak better English than men, with the gap widening this year. Statistically, women are more likely to finish secondary school and go to university. They are also, generally, more motivated when it comes to language learning and more willing to make mistakes.

There is also a correlation between English proficiency and equality and openness. The report states:

“Although English doesn’t undermine hierarchy directly, it may contribute to broadening a society’s horizons. For the majority of the one billion non-native English speakers in the world, the goal is to communicate across borders. With that communication comes freedom to observe how the rest of the world operates. One of the strongest correlations of this year’s EF EPI is to the Economist’s Democracy Index. Contact with the outside world inevitably leads to questions about one’s own society, comparisons, and in many cases, change.”

Speaking English doesn’t create equality in and of itself, but there does exist a correlation; countries that are richer, more internationally-minded and open are typically where the highest levels of proficiency can be found.

The strongest market in the world for EFL teachers is China and there is huge demand for teachers in other Asian countries such as Japan, South Korea, Thailand, and Vietnam. However, despite huge investment in many of these countries there have been no significant increase in proficiency this year and China and Japan remain in the low proficiency band.