Tomo tells us what it’s like to teach English in Japan.  Find out how he got the job, and how he spent Christmas in Japan in his other blogs.

Some of us dread the thought of it, others thrive at the opportunity and the rest don’t really know what to expect to it. Chances are that if you end up working at a private language school (eikaiwa) you will have to teach at least a few of those annoying little things we are supposed to call children. When I started at my school I was most definitely in the first category of the aforementioned – especially that they are one on one lessons so you have to focus all your attention on just the solitary pupil. Kids are fine, even fun, just as long as I don’t have to deal with them. Or so I thought, but now I have to come to enjoy and even cherish my lessons with the little tykes. 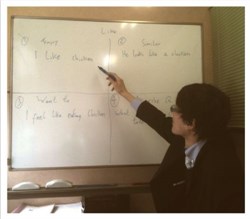 So why the change of opinion all of a sudden? The first reason is that teaching them is actually kind of fun. The children don’t come into the lesson expecting to come out with anything from their lessons (most are simply sent by their parents, whether they want to or not). So when they do get something, you can see it on their faces and it actually makes you feel quite good that they’ve gone away with something. Also, the kids are mostly happy, sprightly and say the funniest things to you; (the exception to this are the junior high school students who (if they don’t want to be there) will just stare at you for the entire lesson and it can be extremely difficult to get them to talk. This brings the expression “blood from a stone” to a whole new level).

On a more human (if slightly selfish) level, the kids’ lessons are also a time when you can switch off a little more than usual. If you teach eight lessons a day, having a 20minute period listening to a language CD can really stop your mind going crazy and give you sometime to rest your voice for the adult lessons, which will no doubt follow. The lessons are (generally) also shorter – 40 minutes as opposed to the usual hour, which means I have time to run out for a cigarette before the next lesson starts! Finally, children (all the way up to high school level) are not going to complain to the managers. I am not advocating bad or lazy teaching in any shape or form (how could I!), merely that with 50 or so students, some complaints when you start are relatively likely to happen. Its nice to know that they wont come from the children!

A typical lesson is around 40 minutes. I normally spend the first 20 minutes playing memory games (matching cards with English words or using numbers) and asking them to read aloud the cards as they turn them over. We would also check any homework at this point. The rest of the lesson is either something basic (songs, alphabets or numbers) for the youngest / most beginner level students, or going through their textbook for those that have one. The book we are using at my school is about a red dragon (Gogo) and his various misadventures. Basically, Gogo is an unbelievably forgetful dragon who always seems to misplace his treasure. He and his comrades then spend each chapter doing / talking about something (What day is it Gogo? What did you do yesterday Gogo? Did you see that Gogo?! etc.) and by the end, the little dragon does something he maybe shouldn’t have. Cue cries of “Oh Gogo!”. A fun packed adventure for all. Homework is set, bye byes and high fives are made and then I run like the wind to get my nicotine kick.

A couple of things I would like to leave with. First is that I used to get worried that some of the children weren’t really leaving lessons with as much new English as I would have initially liked them to have. But I have now learnt that (especially for the very young, as in 4 -6 year olds) the most important thing is that they get used to an English-speaking environment. This is particularly true in Japan, which is not as cosmopolitan as someone from a large English city would be used to. The youngest will not even have learnt the Roman alphabet at school so anything you give them will be of great advantage when they start learning English at school.

Finally there are the parents. Some are great, others slightly strict. I am pretty convinced that about half of the parents are merely looking for babysitter while they go and do some shopping in the town centre. But there are a couple who seem to want to cram English into them from a very young age. I am not one to say what is and what isn’t the correct way of parenting but I do recall one incident when a mother was worried that her child didn’t use the past simple. Given that the boy in question was 5, using another language, I don’t think it was a particular problem. In fact I’m pretty sure when I was 5 I didn’t say, “Yesterday, I practiced tennis!” It was probably more likely along the lines of “Tennis! Play!” (Or was I just a very slow youngster?).

Anyway, I leave you with my favourite quote from the last 2 weeks by a young boy (4) who was counting with me and then said something rather odd in the cutest voice. Actually I was laughing so hard it took me about 5 minutes to pull myself together:

Does Japan sound like the TEFL destination for you?  Get yourself a TEFL Org certificate and you can apply for the freshest TEFL Jobs in Japan with our Jobs Centre.