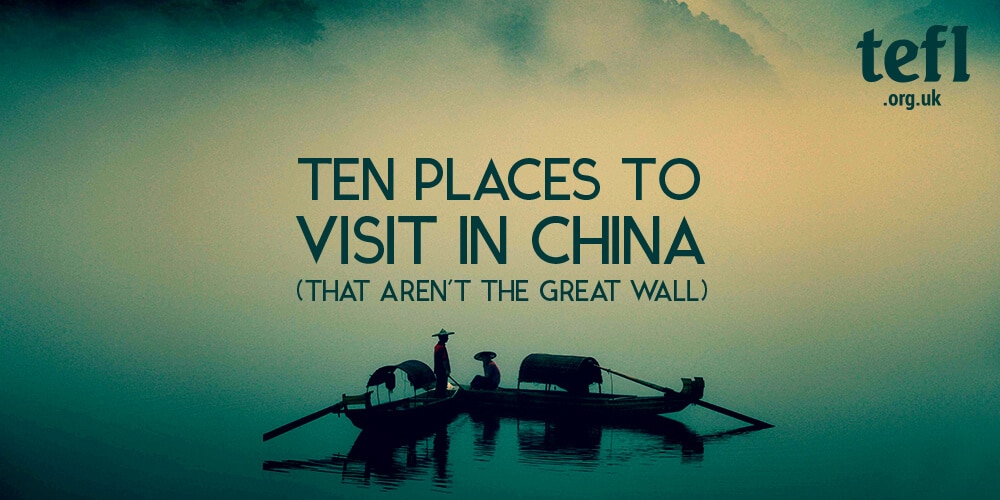 China is extraordinarily diverse when it comes to culture, geography, and language. From rainforests to deserts, huge ultra-modern cities to tiny ancient villages, there is so much for EFL teachers working in the country to explore.

The biggest TEFL jobs market in the world is to be found in China, which is why it’s one of the most popular destinations for our students and was number one on our list of the top places to TEFL this year.

Holly loved how cheap and easy it was to travel by train in China and while living and teaching in the north east of the country was able to explore Dalian, Harbin, Shangaiguan, Beijing, and the North Korea border town of Dandong. Harriet and her partner worked in a suburb of Guangzhou and spent their weekends exploring other cities such as Shenzhen, Shanghai, Zhangjiajie, as well as travelling outside of the country to Malaysia, Thailand, Vietnam and Cambodia. And Joel has been feeding his obsession to travel alongside his job teaching English and has so far visitied Beijing, Xi’an, Harbin, Hangzhou, Suzhou, Nanjing, Tianjin and Wuhan.

So what sights will you check out in China? We’ve put together ten spots from across the country – some popular and unmissable tourist destinations, others a little less well-known – to give you some ideas.

Tianmen Mountain is located in Hunan Province, just a little south of the city of Zhangjiajie  and offers a whole host of impressive sights; walk up 999 steps to the incredible ‘Heaven’s Door’, a water-eroded hole between two peaks; take the world’s longest cable car ride (7km) right up to the top of the mountain; brave a glass skywalk 1,400 feet high; and walk along a cliff-hanging walkway.

The city of Guilin is situated in one of the most picturesque parts of the country and is an ideal starting point for exploring the Li River. Around Guilin you can explore stunning mountain and river scenery, take boat trips, visit caves, take part in rock climbing (it’s China’s top climbing destination), and more!


The Wulingyuan Scenic and Historic Interest Area is located in Huna Province, near Zhangjiajie, and is famous for its remarkable narrow sandstone pillars. It was made a UNESCO World Heritage Site in 1992 and with over 3000 sandstone peaks, waterfalls, canyons, and caves, it’s a truly unique corner of the world.


If you’re interested in what pre-modernisation China looked like then a trip to Fenghuang Ancient Town, located in the southwest of Hunan Province, is a must.  It’s ranked as one of the top ancient towns in China and here you’ll be able to see wooden houses along the river bank and stone roads that have experienced little change over the last 300 years.


While there’s a popular panda base you can visit in Chengdu, if you’re someone who likes to avoid crowds then the Bifengxiu Panda Base, near the city of Ya’an, is a great place to see giant pandas situated within gorgeous scenery. The base has over 60 pandas and it plays an important role in the breeding, research, and public education of giant pandas in China.


Dunhuang was historically an important city along the Silk Road – lying on the edge of the Gobi Desert it was one of the first cities in China merchants from the West would come across. Today in Dunhuang you can visit the Mogao Caves, dug into cliffs by Buddhist monks in 366AD, the Cresent Lake in an oasis in the vast desert, and Mingsha Mountain – also known as the Echoing-Sand Mountain because when the wind blows the noise of the sand moving echoes.


Zhangye can be found in Gansu province, midway through the Hexi Corridor, and was another important spot along the Silk Road. The main attraction here is the truly remarkable geological wonder and UNESCO World Heritage Site that is the rainbow mountains found in Zhangye Danxia National Geopark. Formed by the erosion of red sandstone and the elements over millions of years, the mountains are like something you’ve never seen before.

Built during the Ming Dynasty in 1426, Taxia Village is a peaceful village located in Nanjing Province. It was built by the Zhang family and the Zhang Family’s Ancestral Hall, which was built over 400 years ago, is one of best-preserved shrines of its kind in China. In this sleepy village you can find over 20 tulou buildings; unique to the Hakka people these earth buildings are large, enclosed dwellings and usually circular.


The capital of Heilongjiang province, Harbin is most famous for its Ice and Snow Festival, which takes place in January. The city is only 110 years old, and you can find a lot of Russian-style architecture here – in 1897 the Russians built a railroad to the area and by the 1920s most of the population were Russian. If you’re going to visit the Ice Festival then make sure to wrap up well – the average temperature in January is -25 °C!


Tibet is governed as an autonomous region in China, one that China claims sovereignty over but is believed by many Tibetans to be an occupied independent nation. Due to its tumultuous history and unrest over the years China has imposed travel restrictions, which currently means you can only enter Tibet from within China, you can’t travel there independently without a guide, and you have to apply for an entry permit. Known as the ‘Roof of the World’, the Tibetan plateau is the highest in the world at 4,500 metres, so altitude sickness is common but it’s all worth it to experience the fantastic sights and scenery, and warmth of the Tibetan people.