This time last year I was having a minor meltdown. My flight was four days away, I still hadn’t got my visa, and fitting my life into a 25kg suitcase seemed like mission impossible.

A week after my graduation I had dropped the bombshell on my parents that actually I wouldn’t be moving to London, working in a graduate scheme and joining the daily grind, and that I would instead be moving to South Korea. I was offered a job teaching English in Incheon and by the end of the summer I was saying my goodbyes and hopping on a plane to the other side of the world. Best decision I ever made. 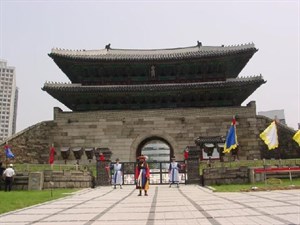 I knew I wanted to go to Asia, but that was about as much as I knew. After a few weeks of research I had my heart set on South Korea. Yes, there were practical reasons, South Korea offers probably the best deal for English teachers on this side of the world, but the culture sounded interesting, and I liked the fact that it wasn’t an obvious choice. I loved watching people’s expressions when I told them where I was going. They ranged from shock, to bemusement, to intrigue.

A shrimp between two whales, South Korea is a fascinating, if often slightly overlooked country and this is a very exciting time to be here. From sunbathing on a sandy beach, to watching the sun rise from a cliff-top temple, or partying the night away in the heart of a bustling metropolis like Seoul, Korea really does have it all!

I work at an English academy in Incheon, and my students are aged between 5 and 16 years old. The kids make me want to cry with laughter, burst with pride and scream in frustration, but I love each and every one of them. I’m still working out how I can get a few of them in my suitcase when I eventually leave! Of course there are a few little terrors who can go from 0 to tantrum in 5 seconds flat. Those are the ones that I relish writing reports for. But on the whole I have nothing to complain about!

Walking into that classroom for the first time, seeing ten expectant little faces staring up at me, I won’t lie to you, was absolutely terrifying. The responsibility of having to actually impart knowledge suddenly dawned on me. What if they don’t like me? What if their parents don’t like me? What if I accidentally swear in front of them? By the time I had got my head around teaching kindergarten, I was faced with the dreaded teenagers. Flying them around the classroom like Superman and playing Hangman probably wasn’t going to wash with them. But again I had nothing to worry about, they took a little longer to loosen up but we have so much fun in class now.

Anyway, with a few minor mistakes along the way, both the students and I have got through the last 12 months largely unscathed (except for that incident with Ryan’s front teeth, but the less said about that the better).

I’m sure there will be many more learning curves to come over the rest of my time in Korea, however long that may be, but it’s all part of the fun right?