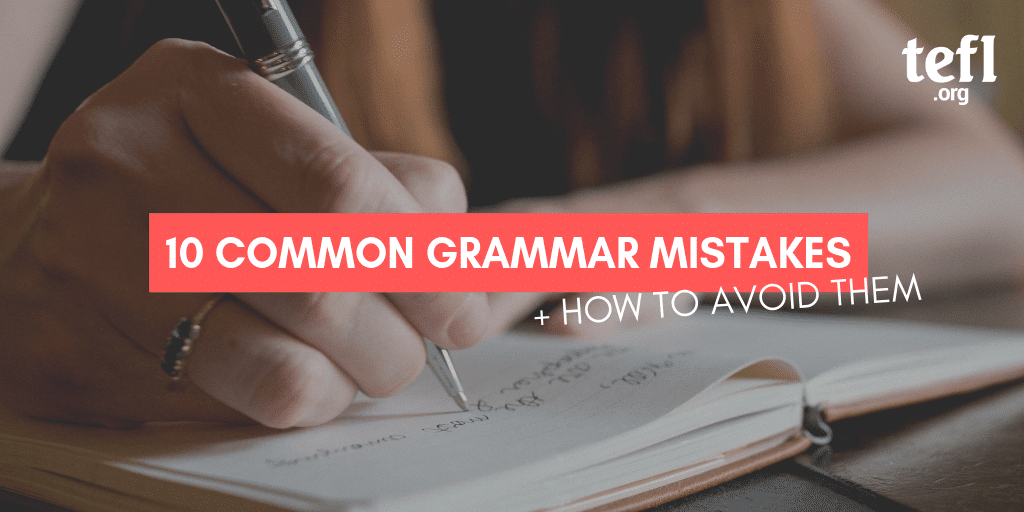 We all make grammar mistakes. Even grammar experts reach for the reference book and everyone makes typos from time to time despite knowing the rules.

A solid grasp of English grammar is essential for any EFL teacher. Native English speakers will know when something sounds right or wrong but many won’t have the vocabulary or understanding to explain why that is. Unless you’ve extensively studied English grammar before then a grammar component is an essential part of your TEFL training.

It might not be glamorous or exciting, but if you want to teach English then you’re going to have to spend some time with grammar!

Our 30-hour grammar course (included in all our 120+ hour TEFL courses) is exactly what every first-time EFL teacher needs in order to feel confident in the classroom with grammar.

Brush up on your knowledge below with these 10 common grammar mistakes and our tips for how to avoid them. There’s also a quiz to test yourself at the end, so read closely!

An extremely common one to mix up. ‘They’re’ is always a contraction, so all you have to do to check if it’s correct is replace it with ‘they are’ and the sentence should still make sense.

If you’re talking about a location you want to be using ‘there’ and ‘their’ is used to indicate possession and is almost always followed by a noun. Simple!

Possibly the trickiest one on this list. ‘Effect’ is a noun, ‘affect’ is a verb… most of the time – more on that in a moment.

‘Affect’ means to influence or create a change in something.
‘Effect’ is the result of a change.

Tip for remembering: verbs relate to actions, action begins with ‘a’ just like ‘affect’, which is a verb!

But, to complicate things, there are occasions when ‘effect’ acts as a verb – such as its past participle – and ‘affect’ as a noun. Fun, huh?

And then ‘affect’ can also be an adjective. An affected behaviour – or an affectation – refers to pretentious behaviour unnatural to oneself.

‘Farther’ is used when referring to a physical distance and ‘further’ for a figurative distance. Easy to mix up but it’s actually quite simple to figure out which one to use if you’re stuck: just remember that ‘farther’ has the word ‘far’ in it, indicating distance. If it isn’t clear this is one you can get off with using interchangeably as people have been doing for hundreds of years!


You can often replace ‘which’ with ‘what’ and it will still be grammatically correct, but it doesn’t always work the other way round. ‘Which’ is used when we’re talking about a few options – e.g. ‘which cake would you like?’
This would still be correct if replaced with ‘what’.

‘What’ is used when there is no limit to the number of choices – e.g. ‘what is your email address?’
Which doesn’t work here because there is only one answer.

There’s one particular instance where people often get confused and use ‘I’ when they should be using ‘me’.


These two are often treated as interchangeable when they’re not. ‘i.e.’ is an abbreviation of ‘id est’, a Latin term meaning ‘that is’ and ‘e.g.’, another Latin abbreviation, means ‘exempli grati’, or ‘for example’.

You should use ‘i.e.’ when you mean to say ‘in other words’ and ‘e.g.’ when you’re listing examples.


Commonly mixed up but it’s very simple to check you’re using the right one! ‘It’s’ is always a contraction, so all you have to do to make sure you’re using it correctly is replace it with ‘it is’ and the sentence should still make sense. If it doesn’t then you should be using its, which indicates possession.

Which one you need to use depends on whether the noun is countable or uncountable. A countable noun is one you can… well, count. They have both a singular and plural form. For example, a carrot/four carrots, a dog/two dogs, etc.

Uncountable nouns can’t be counted with numbers and are always singular. Air, water, and rice are all uncountable nouns. Sure, you could count the number of grains of rice in a bowl but you wouldn’t say something like “I’ll have 200 rices”.

‘Fewer’ is used if we’re dealing with a countable noun – e.g. “Can I have fewer potatoes, please?”

‘Lose’ is a verb and ‘loose’ is an adjective. It’s common to see the two mixed up when written down but not when said because they sound different. A very simple way to check is to say the sentence out loud and you’ll hear if it sounds right or not. “Lose” rhymes with “snooze” and “loose” with “moose”.