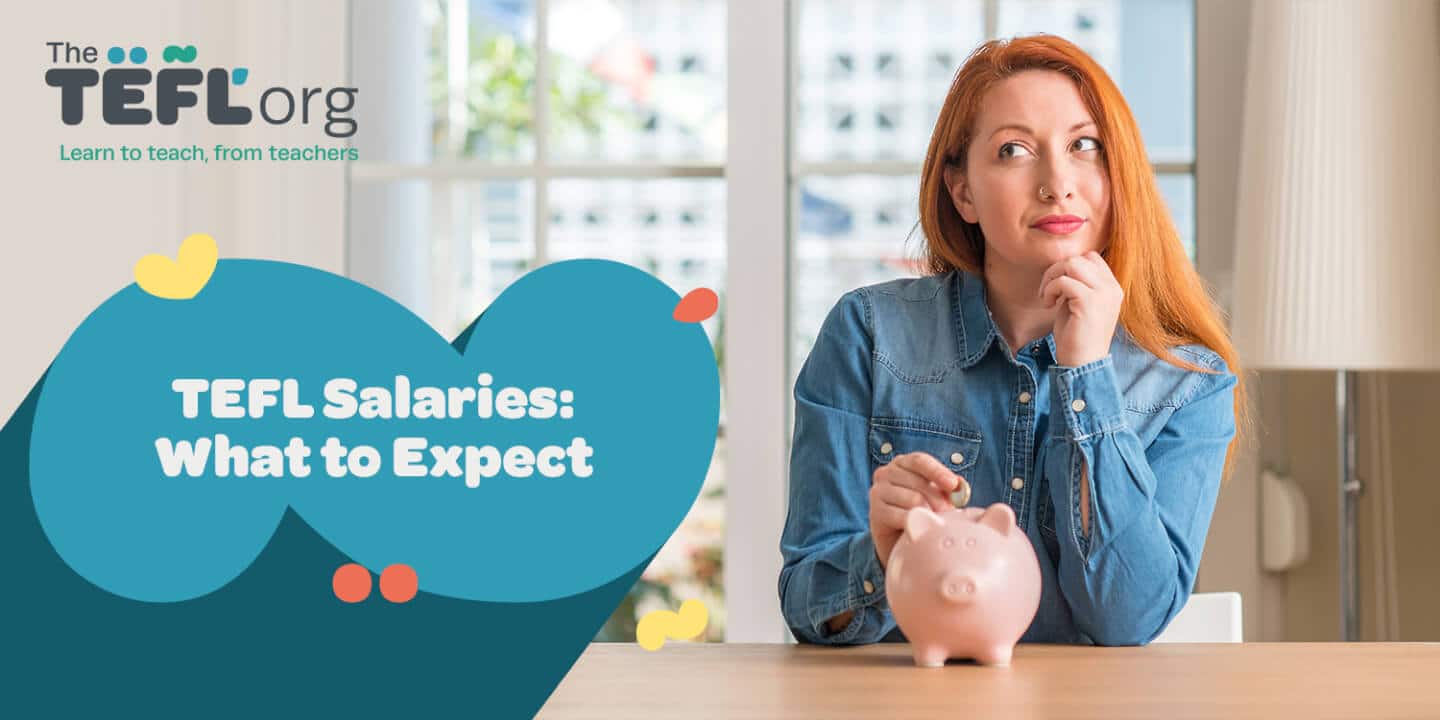 Earning potential might not be the primary motivator behind your decision to TEFL – you’re unlikely to get rich as a teacher, after all – but it’s still an important factor to look into.

Will a TEFL teacher’s salary be enough to support you while you live abroad? Will you have enough to live comfortably, or will money be tight? And can you save money while teaching English abroad?

The answer to these questions mainly comes down to where you teach. In this article we’re going to take a close look at TEFL salaries, covering what entry-level teachers can expect to earn, as well as the average salaries for dozens of countries across the globe.

How much can you earn teaching English?

How much you can earn teaching English abroad can depend on a few different factors, such as:

Let’s take a look at each of these points in more detail.

Teachers’ salaries vary hugely from country-to-country. As a general rule, TEFL salaries will be in line with the cost of living and you should be able to live comfortably on your wage.

Higher salaries can be found in Asia and the Middle East, so if returning home with a healthy bank balance is your main goal then that’s where you’ll want to focus your search.

You’ll also find that salaries can vary significantly within a country. Salaries in big cities will typically be higher than in smaller towns and more rural areas to compensate for higher costs of living.

How much experience you have

TEFL salaries are typically determined by experience more than anything else. And this means direct EFL teaching experience – experience teaching other subjects, while definitely beneficial, won’t give you an instant salary bump.

A degree is a visa requirement for a number of countries abroad. Unfortunately, the countries that pay the highest also typically require a degree, so your earning potential is limited without one.

Having a degree opens up doors and makes it easier to secure work, but don’t despair if you don’t have one. There are still plenty of opportunities to TEFL. Check out our post about how to TEFL without a degree for more information.

It would be disingenuous of any TEFL course provider to tell you that their course will earn you more money. It doesn’t really work like that – your earning potential as a first-time teacher with a qualification from a properly accredited TEFL course provider vs a CELTA, for example, is typically the same. Remember, experience is the most important factor in determining salaries.

Where there can be a difference is if you’ve signed up for a budget TEFL course, like those advertised on Groupon. These courses are incredibly cheap for a reason – they usually include a variety of hidden costs, little or no tutor or customer support, and, most problematically, are rarely adequately accredited.

One of the first things most recruiters and employers will look at is if your TEFL qualification is accredited by established and respected external bodies. If it isn’t then you may struggle to secure work, and having fewer options means you may end up settling for a lower salary. It can also put you at risk of falling foul of a TEFL scam or bad employer!

Salaries vs the cost of living

When you’re looking into TEFL salaries it’s important to also consider the cost of living in that country. For example, the average salary in Chile is around £550 – £800 ($700 – $1,000), which probably sounds low if your comparison point is salaries in your home country. But with the low cost of living in Chile that will be enough for you to live off.

On the other hand, in some countries salaries might look high but you need to factor in other expenses. The average salaries in Northern Europe look at first glance to be fairly high, but so are the cost of living and taxes.

Accommodation, flights and other benefits

In some countries it’s common for teaching contracts to include a range of benefits, such as flight reimbursement, accommodation, and health insurance.

We’ve put together some useful tables detailing the average salaries and requirements for countries across the globe. Keep in mind that these are intended as a guide, but we’ve done our best to ensure the information is accurate and as up-to-date as possible!

One of the best ways of getting an idea of how much you can earn in in a specific country is to look up job adverts there. You can take a look at what’s listed over on our TEFL Jobs Centre.

The amount you can earn in Europe really varies by region, with higher salaries to be found in the North and West, and lower in the East and South. But remember that where salaries are higher the cost of living is also going to be higher!

In many European countries it’s common for teachers to work for multiple companies and schools for an hourly rate. In most countries it can be tricky or even near-impossible for non-EU citizens to find legal work, so make sure to investigate visa requirements.

If you’re looking for the best entry-level salaries then Asia is your best bet. China represents the biggest TEFL jobs market in the world, but you can find strong demand in the likes of Thailand, Vietnam, South Korea, and Japan. You’ll need a degree to teach in most of Asia, with Cambodia the only exception.

In some countries, like China and South Korea, it’s standard for accommodation to be included in a teacher’s contract, which frees up a lot of your wage.

You won’t be left with much to save when teaching English in this part of the world, but the salaries aren’t what draws teachers to Central & South America.

Living costs are generally very low, but don’t expect to be able to save much after accommodation and other essentials. It’s also important to note that it can be hard to get a sense of what the current going-rate is as many employers won’t advertise online – finding work in this part of the world is best done on the ground.

The Middle East is where you’ll find the highest TEFL salaries in the world. But the high, tax-free salaries, mean there’s plenty of competition for positions, which means employers can afford to be picky. As a result, you’ll need a couple of years’ experience under your belt to be eligible for jobs in countries like Saudi Arabia and the UAE.

In Africa you’ll find most paid opportunities are in the north of the continent, in countries such as Egypt, Morocco, and Algeria. Elsewhere most positions are on a voluntary basis.

Where are you interested in teaching English abroad? Let us know in the comments!

2 thoughts on “Teaching English abroad salaries: what to expect”