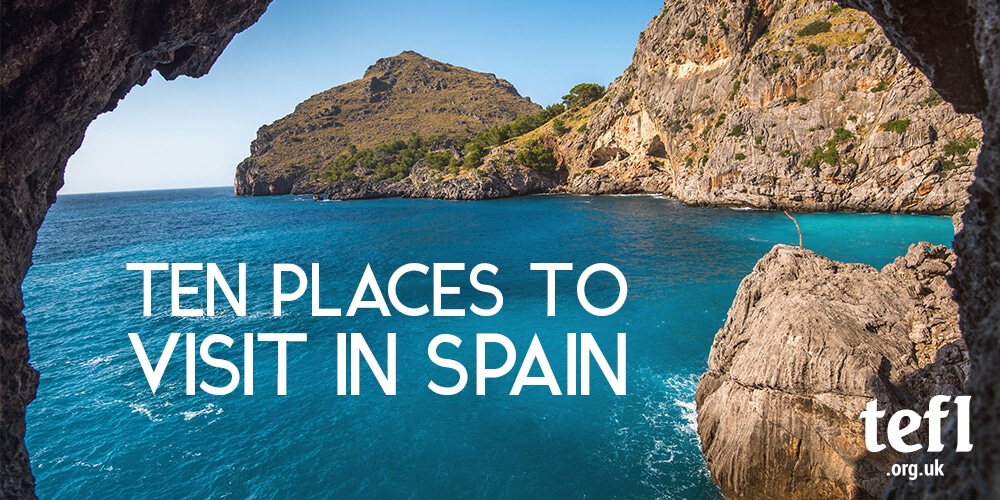 With great weather and culture combined with an abundance of work for English teachers is it any wonder that Spain is the most popular destination in Europe for our TEFL graduates?

Our Marketing Manager, Alan, has previously worked as an English teacher in Spain and has suggested ten great places to visit! Here’s what he has to say about TEFL in Spain and making the most of what the country has to offer:

“I loved living and working in Spain! After my Erasmus semester in Córdoba, I knew I wanted to head back as soon as I had finished university.
There are so many teaching opportunities available – I couldn’t quite believe it until I got there. And they’re not only in the large towns and cities, even smaller towns have an after-school academy or language school.
Teaching part-time allowed me to improve my Spanish, see some of the less touristy areas of Spain, and of course, try more amazing Spanish food.
It was difficult to whittle it down to a list of ten places (I’m sure it will change again in another five minutes!) What are your favourite places to visit in Spain?”

Just an hour from Madrid by AVE (high-speed train), Toledo is known as the “city of three cultures” – for centuries Christian, Muslim, and Jewish communities co-existed meaning there’s a fascinating mesh of styles to discover across the city. Swords used in Lord of the Rings and Game of Thrones were forged in Toledo, so you can find several shops selling replicas (we’ll let you work out the logistics of bringing one back on a plane yourself!). Toledo was home to the Mannerist painter El Greco for much of his life and the Museo del Greco is well worth a visit – it hosts a replica of his home in Toledo as well as a number of notable works.

Another great spot just half an hour away from Madrid by AVE is the World Heritage City of Segovia. Rumour has it, Walt Disney modelled Sleeping Beauty’s castle in Disneyland on the Alcázar of Segovia, which has served many purposes since it was built from a fortress, to a palace, to a prison, and now a museum. Other must-see sights include the impressive Segovia aqueduct, the Royal Palace of La Granja de San Ildefonso, and the cathedral.

The capital of and largest city in Andalusia, Seville is a city rich in Moorish heritage and the best place to experience flamenco culture, which originated in Andalusia. In Seville you’ll find orange tree-lined streets, fantastic tapas – there are said to be around 3,000 tapas bars alone in Seville! – and incredible architecture and history.

Pamplona is the capital of Navarra and hosts the famous festival of San Fermín during which the terrifying “Running of the Bulls” takes place. If you’ve ever fancied being chased down narrow Spanish streets by a raging bull then make sure you’re in Pamplona on July 7th! The city is a popular stop along the Camino de Santiago, a 790km pilgrimage trail across the top of the country.

Valencia is the third-largest city in Spain and hosts a wonderful combination of old and new with a history that dates back to 138BC and some of the most striking avant-garde architecture in Europe. It’s a city of innovation and is bursting with culture, art, nightlife, great food, and great beaches – it pretty much has it all!

Granada is famous for Spain’s most visited attraction, the Alhambra palace, a palace and fortress first constructed in 889AD and home to arguably the best medieval gardens in Europe. The Andalusian city lies at the foothills of the Sierra Nevada mountains.

To the west of Madrid, Cáceres has the advantage of being relatively tourist-free. It’s a stunning city and was used as a filming location for the 7th season of Game of Thrones! Cáceres is also home to the WOMAD (World of Music, Arts and Dance) festival, which started life as a project by Peter Gabriel and has been held in the city since 1992 and is free to attend.

Málaga has a lot more to offer than just a transport hub; it’s the city that gave the world Picasso, home to seven Michelin starred restaurants, and is full of great museums and galleries. It’s a lively and exciting city and one that’s definitely worth spending some time in rather than just passing through the airport.

The Basque city of Bilbao was put back on the map in 1997 with the arrival of the Guggenheim Museum and there are plenty of cutting-edge architectural feats to discover here. Bilbao is also of particular interest to EFL teachers as it hosts the TEFL conference and jobs fair, Spainwise North.

Sitges is a coastal town in Catalonia, to the southwest of Barcelona. It’s well-known as an LGBT hotspot and also hosts the Sitges International Film Festival, which is one of the foremost horror and fantasy film festivals in the world.